Lobsters find their feet at the Isles of Scilly 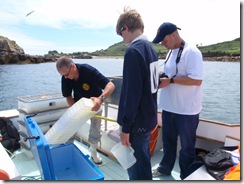 On the 9th July the Lobster Hatchery took 1000 baby lobsters over to the Isles of Scilly to be released back into the wild. The release was made possible with the support from the Isles of Scilly Steamship Company who gave us a free crossing for the lobsters, staff and equipment and also to the Hell Bay Hotel who laid on the accommodation, boats and local knowledge to be able to release onto perfect lobster ground.

We were up with the sunrise at 4am and on a tight schedule.  Westcountry ITV News joined us at 5am to film us packing up the last few lobsters at the hatchery and then followed us to Penzance where our lobsters were craned on to the Scillonian. 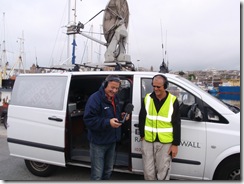 In between coffee and bacon rolls on the Quay, we had photographers from the press and a live interview for Radio Cornwall.  On arrival Henry, Tresco Harbour Master, Philip Callan, General Manager of Hell Bay Hotel and our pristine boats awaited us and the lobsters were loaded straight on board.  We were off out to Bryher to bid our lobsters farewell.

As we drifted slowly along the channel between Bryher and Tresco the baby lobsters were poured into a box on the boat where sea water was pumped directly out of the sea into our release box at one end and out down a wide necked tube the other end, directly to the seabed. Lobsters at this stage in their life cycle bury under the gravel for two years and they are very rarely seen in the wild during this time, by people, but most importantly predators. 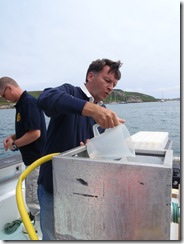 Everybody on board took pleasure in putting lobsters back into the sea, Alistair the Chef and Philip, General Manager of Hell Bay Hotel, the camera crew, Henry, the Harbour Master and Tristan Dorrien-Smith. Later that evening, we met a couple who had been watching us from the shore and they said ‘they couldn’t understand what was going on, it seemed we were putting things back into the sea, as opposed to taking things out?’ – it does feel good.

Philip Callan, Hell Bay Hotel is really keen on getting involved with the work of the Lobster Hatchery and we hope this is just the beginning of a long term partnership. Although we have released lobsters on the Isles of Scilly in the past, we have never released so many in one trip and we would like to think that that we can make it an annual event.

Your ticket for the: Lobsters find their feet at the Isles of Scilly

Lobsters find their feet at the Isles of Scilly