The National Lobster Hatchery > Blog > News and Events > Thermidor, our long standing resident orange lobster is released back into the ocean

Thermidor, our long standing resident orange lobster is released back into the ocean

November 9, 2010
No comments yet
News and Events 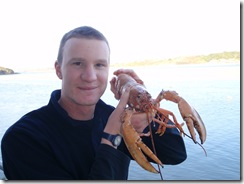 An exceptionally rare orange lobster has been returned to the ocean by Padstow fisherman and hatchery supporter Mr David Evans. The adult hen lobster, whose shell was bright orange (due to a genetically inherited pigmentation), was nicknamed ‘Thermidor’ by staff who thought her colouration looked more like that of a cooked lobster. The feisty female has spent her last 2 years on display in the aquarium section of the hatchery’s visitor centre.

Hatchery technician Charlie Ellis said, “we like to rotate our display animals when we can so they don’t get too used to a small territory and a hearty diet of mussels and fish, and Thermidor is our longest serving display animal. David is due to be releasing some of our hatchery-reared juveniles into the wild soon, and he’s agreed to take Thermidor out at the same time. She’s also now matured to the age where she’s ready to start breeding; this year she laid thousands of eggs but had no male around to fertilise them, so it’ll be interesting to see in the future, if she is caught pregnant, whether the next generation of lobsters we raise here at the Hatchery will be orange!”.

Replacing Thermidor in the visitor centre is a crawfish, or Spiny Lobster, a locally rare species with enormous antennae and a spikey armoured shell, who is settling nicely into her new home.

Your ticket for the: Thermidor, our long standing resident orange lobster is released back into the ocean

Thermidor, our long standing resident orange lobster is released back into the ocean